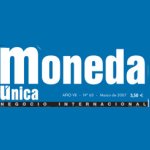 The foreign trade magazine, Moneda Única, dedicates two pages of its March edition to highlight the work of the Leading Brands Forum, with special mention to the role that our association is developing in the promotion of Spain’s image in China.

In an article, just under two pages long, Lope Santamaría writes about the Chinese Plan and the conferences on “Spanish ambassador brands in China” that the Forum organized in Beijing and Shanghai in January with remarkable success regarding attendance and local media turnout.

In addition, the March edition of Moneda Única also includes a reference to the documents that the Forum presented to the Spanish and Regional authorities to express its concern about the EU requirement that the Spanish Government must remove the tax deduction for the financial goodwill allowed against company taxes.