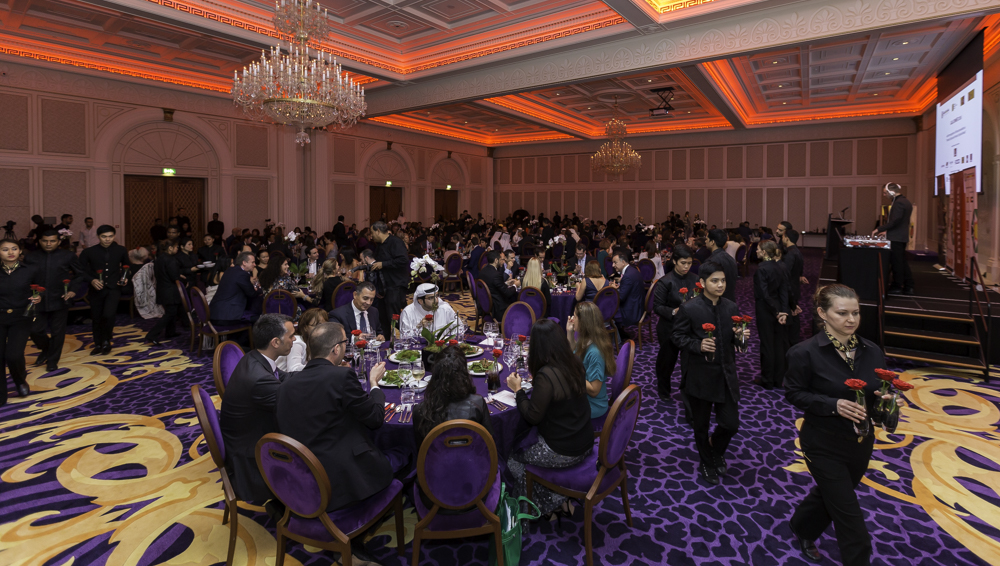 On April 13, The Forum of Brands and the Office of the Government High Commissioner for the Spain Brand attended a gala dinner held by the Spanish Business Council (SBC) in Dubai, to publicly acknowledge the Friends of the Spain Brand and of Spanish Brands in the United Arab Emirates (UAE). The event, which counted on the support and involvement of the Embassy of Spain in the UAE, was attended by about 200 people, amongst them representatives of Spanish companies established in the region and Emirati guests, who enjoyed a menu designed by the Spanish chef, Quique Dacosta.

Ricardo Fisas, President of the Spanish Business Council and Vice President of Natura Bissé, was responsible for inaugurating the event and for highlighting the important work of the SBC in forging closer economic and trade links between Spain and the United Arab Emirates. Trade between Spain and the UAE has grown by over 73% since 2010, with trade deals exceeding 1,500 million Euro per annum in Spanish exports, making it our second largest trading partner in the region, second only to Saudi Arabia. The Emirates represent a strategic market for Spanish companies and a great opportunity for the nearly 200 Spanish companies with a presence in the country, not only through already ongoing projects, but also because of upcoming events such as the World Expo 2020 Dubai or the World Cup of 2022, which will require Spanish know-how in areas such as infrastructure, logistics, energy and technology.

Jose Eugenio Salarich, Ambassador of Spain in UAE and Rafael Conde, Director of the Office of the High Commissioner for the Spain Brand, were responsible for presenting the awards, along with Ricardo Fisas, to prominent individuals acknowledged as Friends of the Spain Brand, and they emphasised in their speeches the excellent relationship that unites the two countries, highlighting and rendering homage to the commitment of the award winners.

Furthermore, during the ceremony Friends of Spanish brands also received acknowledgement. Pablo Lopez, deputy Director General of the Forum of Brands, was on hand to present and outline the purpose of these awards, which is none other than to publicly acknowledge those individuals or local companies who have been outstanding in their links and support for Spanish brands in their international expansion.

Abdelqader Abdulla Al Maeeni, CEO of the Emirates Authority for Standardization & Metrology (ESMA), was honoured as a friend of Natura Bissé. Ricardo Fisas, Vice President of the cosmetics firm, presented the award to Mohammad Al Hashmi, head of the Department of Employment of ESMA.

On behalf of Lladro, the award was bestowed on the firm Chalhoub Inc. Pavlina Sochou, Operations Manager of the Luxury Gifts division collected the award, on behalf of Chalhoub, from the hands of Pablo Lopez, deputy Director General of Forum Brands.

And lastly, the Southern Dubai restaurant was recognised as a Friend of the Marqués de Cáceres brand in the United Arab Emirates. Juan Carlos Gonzalez, restaurant chef, received the award from Pablo Lopez, deputy Director General of the Brands Forum.

This accreditation of the Friends of Spain Brand and of Spanish Brands is an initiative that seeks to acknowledge those prominent local representatives, companies and institutions which have excelled in their links with Spain and Spanish brands in their respective countries. As well as in Dubai, the Friends of the Spain Brand and of Spanish Brands has previously celebrated acts of acknowledgement in China, the UK, Russia, the USA (Florida), Japan and Hong Kong.

You may view the complete photo gallery of the event by clicking here.