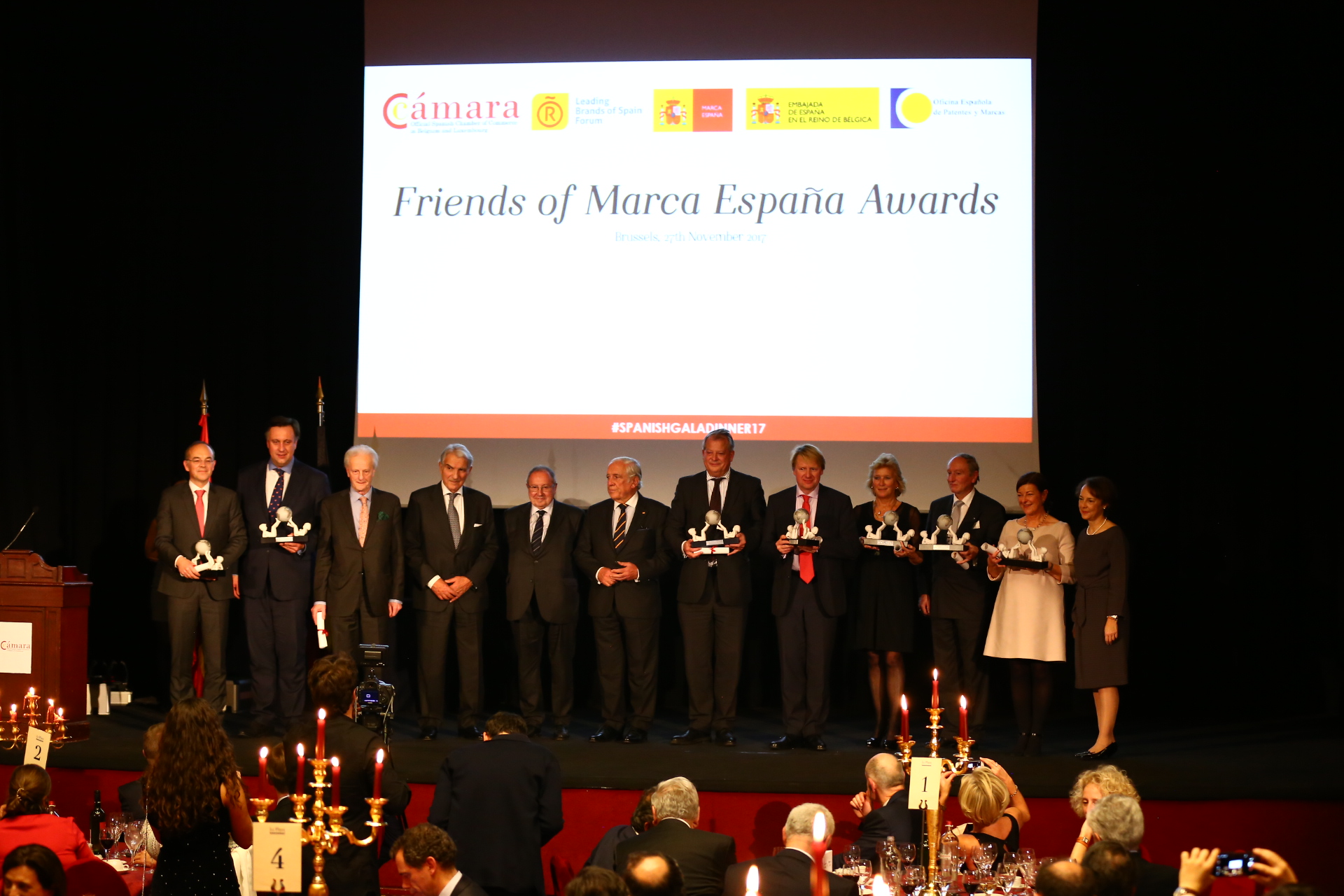 On November 27th the Official Spanish Chamber of Commerce in Belgium and Luxembourg hosted a gala dinner at Hotel Le Plaza in Brussels in recognition of the Friends of the Spain Brand and of Spanish Brands in Belgium. This initiative is led by the Leading Brands of Spain Forum and the Office of the High Commissioner for the Spain Brand with the aim of publicly acknowledging certain Belgian people, companies and institutions for their outstanding support and collaboration with Spain and/or Spanish brands within each of their respective professional spheres. This is the ninth edition of the awards and the first in Belgium, with previous ceremonies having taken place in Hong Kong, Shanghai, Moscow, London, Miami, Tokyo, Dubai, and Mexico.

Juan Rodríguez-Villa, president of the Official Spanish Chamber of Commerce in Belgium and Luxembourg, started the event by speaking about the work of the Chambers of Commerce abroad and the support they provide to companies that are expanding internationally.

Next, the president of the Leading Brands of Spain Forum and the Chamber of Commerce of Spain, José Luis Bonet, discussed the value of “Friends of the Spain Brand” and “Friends of Spanish Brands” and their contribution to our country’s image and the success of our companies abroad. “They expand the positive image of Spain in the world and promote our commercial exchange, our culture, our competitiveness and our quality,” he said.

After these speeches, awards were presented to “Friends of Spanish Brands,” Belgian people and businesses with a direct link to Spanish companies, by firms such as Freixenet, Cosentino, Lladró, Fermax and Andreu World.

After a dinner prepared by chef Marcos Morán of Hispania restaurant to shine a spotlight on Spanish cuisine, Ambassador of Spain in Belgium Cecilia Yuste emphasized the strong relations between the two countries, Belgium being the Spain’s eighth largest business customer and Spain being Belgium’s seventh. Yuste noted, for example, that 2.5 million Belgian citizens travel to Spain each year, and that 10 Belgians buy homes in Spain every day.

After the Ambassador’s speech, awards were presented to the following “Friends of the Spain Brand”:

CEO of Belgian company INTERPARKING, one of the leading European groups with over 350,000 parking spaces. He loves Spain, its culture and its geography. Spain is one of the countries where INTERPARKING has invested the most, and the goal is to continue expanding throughout the country.

Bert Dehandschutter is a partner at Belgian law firm Racine. He is currently considered one of the most sought after lawyers for Spanish companies trading in Belgium.

Mr De Clerck is a pioneer of foreign tourism for the entire coast of Cádiz. He is currently Chairman of the hotel group Hoteles Andaluces Con Encanto (HACE) in the province of Cádiz. He is also Honorary Consul of Belgium in the province of Cádiz and chairs the Estación Náutica Bahía de Cádiz, which works to promote the Bay of Cádiz as a destination for nautical tourism.

Each year this festival commemorates the arrival of the Emperor in Brussels to present his son Philip II as his successor. These combined inititiatives organise events each year based around the figure of the Emperor and his era. Both are part of the European Routes of Emperor Charles V, which are recognised by the European Council and spearheaded by the Academy of Yuste Foundation with the goal of instilling the unifying European spirit of that time.

The event will acknowledge the work of all Spanish language and literature professors from seven Belgian universities that have academic chairs dedicated to these subjects.

Carmen Van den Bossche began her career in the tourism sector over 40 years ago in the Van Den Bossche family company Sylvae Tours. She now manages Caractère, a tour operator specialising in charming hotels and experiences that is looking to Spain for the launch of new products targeted at segments and destinations that play a part in achieving the objectives set by Spain’s tourism policy.

General Director of the tour operator Transeurope; thanks to her, there is a specific catalogue dedicated to Spain. She also regularly collaborates with Spain’s Department of Tourism in the organisation of activities with travel agencies, showcasing different destinations in Spain, such as Andalusia, Galicia, the Basque Country, and the Canary Islands.

All winners were presented with a statuette designed by Lladró, symbolising the friendship between both countries.

The event concluded with a speech by the High Commissioner for Marca España, Carlos Espinosa de los Monteros, who emphasized that “Marca España includes all of us who are working to boost our country’s image and reputation, because this generates wealth.”