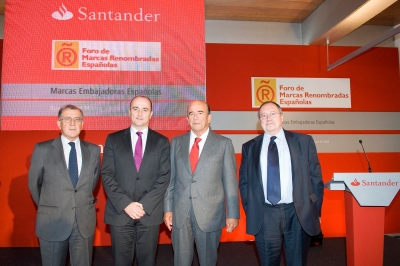 On 21st March took place the official presentation of the Spanish Ambassador Brand Plan to the Spanish Trade Administration, a project run by the Leading Brands of Spain Forum in collaboration with the Spanish Exporters and Investors Club. The event, attended by the Minister for Industry, Tourism and Trade, Joan Clos, was held in the new headquarters of the Spanish Academy of Arts and Cinematographic Sciences, and included the presentation of a DVD outlining the Spanish Ambassador Brand Plan. The Plan is based on the strength which can be exerted by leading Spanish brands and the driving force behind the “Made in Spain” concept on international markets, strengthening and improving the image of Spain overseas and causing a multiplying effect on other small and medium size enterprises in Spain looking to expand overseas.

Despite the fact that Spain is today the eighth largest economy in the world and some of our brands have achieved positions of world leadership in their categories, this reality contrasts sharply with the poor perception of our country on different international indexes.

For this reason the Leading Brands of Spain Association, together with the Spanish Exporters and Investors Club, has proposed the implementation of this Plan to the Spanish Trade Administration, aiming at:

Intensifying and accelerating the process of implantation of Spanish brands on international markets, in particular in the eleven countries selected as priority targets by the Spanish Trade Administration.

Repositioning the image of the Spain Brand with the support of ambassador brands, promoting an image of great reliability and added value, contributing to the reduction of account deficits.

Generating a culture of collaboration and co-investment between ambassador brands and Public Administration which, with the active support of civil society, contributes to improving Spain’s image overseas.

Producing a “locomotive affect” where the leading brands facilitate the internationalisation of other Spanish brands.

Counterbalancing the effect of the sale of Spanish brands to third parties, as a result of consolidation processes, supporting the ambassador brands and rewarding the launch of new brands and the acquisition of international brands.

AMRE has developed its own analysis method to identify between 120 and 150 Spanish brands with the potential to act as ambassadors and thus contribute to adding value and strengthening the image of Spain overseas.

In order to increase this efficiency, the Plan groups the Spanish brands into ten large sectors known as Business Units: Food and Drink, Fashion, Habitat, Tourism and Leisure, Finance, Technology, Infrastructures, Education and Professional Services, Distribution and Logistics, and Health.

The key concept of the Plan is the use of “co-branding”, a communication strategy which involves all the Business Units and the Ambassador Brands in order to promote the image of Spain and encourage the internationalisation of other Spanish brands. It is therefore a way to achieve an association between the Spanish Ambassador Brands and the National Brand, for which many possibilities are available, to be studied by the brands and the administration itself. One of these possibilities is to obtain tax deductions for brands which decide to take part in the project, adding the promotion of the Spanish Brand to the tax regime applicable to events of particular public interest (e.g.: America’s Cup in Valencia, Expo Zaragoza…).

Overall, the Spanish Ambassador Brand Plan is, among other things, an innovative and essential project, which quantifies the objectives to be met and which promotes a strategic alliance between the leading brands and public administration. Because, as José Luis Bonet, Chairman of the Leading Brands of Spain Forum said, “together we can go much faster”.

In order to facilitate the operability of the Plan, three working groups have been set up, including the Spanish Ambassador Brands and the state administration. The senior committee guarantees the coordination and correct operation of the three groups: one on the Technological Image of Spain, another on Consumer Goods brands and a third on China, making use of the celebration of the Year of Spain in the Asian giant.