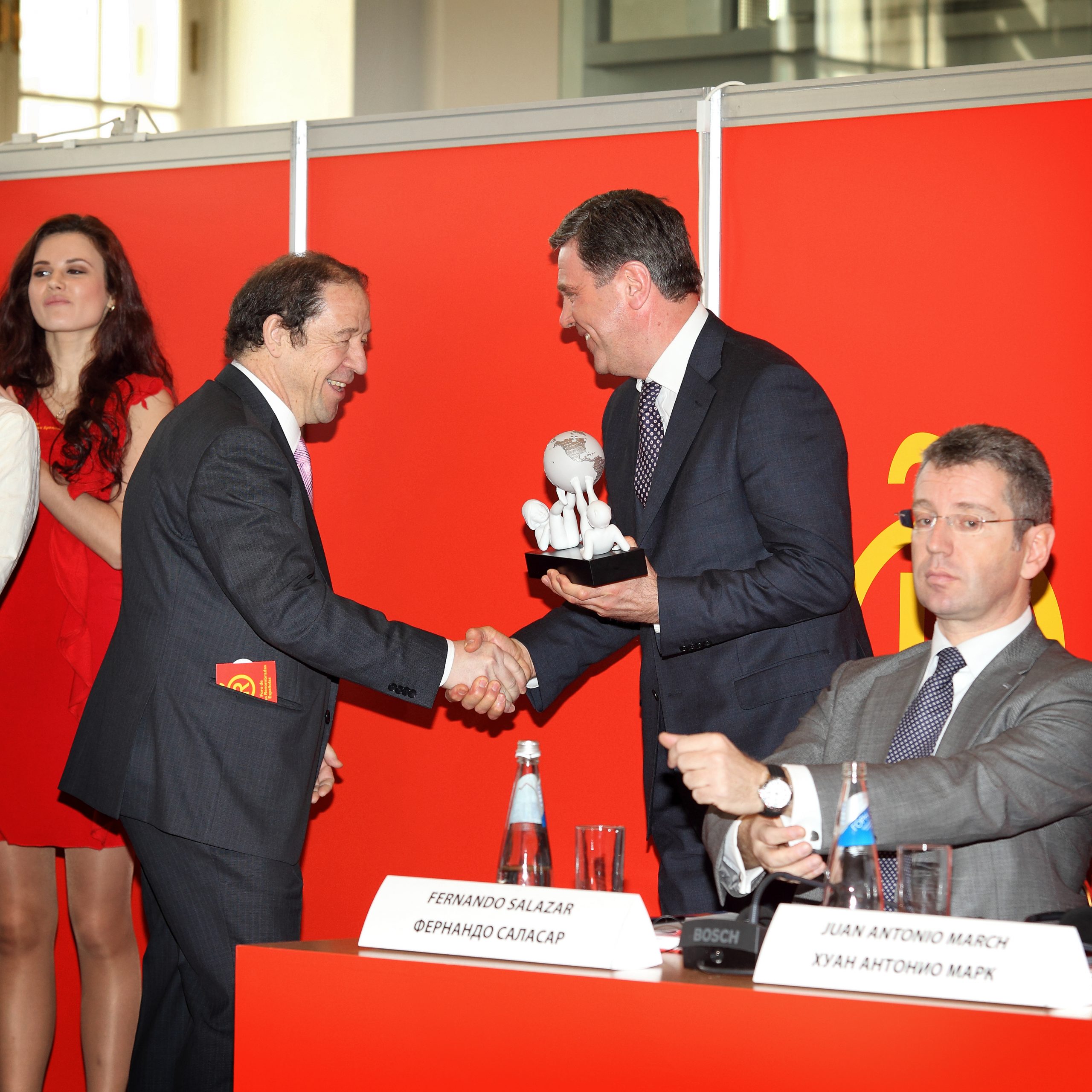 Friends of the Spain Brand and the spanish brands in Russia

Russia, which ranks amongst the ten most important economies in the world and is a member of the so-called BRICS, is a current and future market for Spanish companies. For this reason, and also with a view to strengthening the bonds of friendship between Spain and Russia, particularly from an economic and commercial standpoint, the Leading Brands of Spain Forum (FMRE) organised the Day of the Leading Brands of Spain in Russia on 28 March 2011, in the Manège Pavilion in Moscow. The conference was designed to draw attention to the business reality of Spain as an innovative, industrialised country, and publicly acknowledged the ‘Friends of the Spain Brand and of the Spanish Brands in Russia’, those individuals or institutions that have stood out for the support they have given Spain or Spanish companies operating in the Russian market. 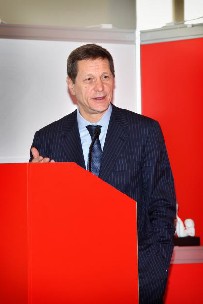 Russian Deputy Prime Minister and key promoter behind the Dual Year of Spain in Russia and Russia in Spain. Zhukov expressed his gratitude at being the first Russian in history to receive such acknowledgment and highlighted the Russian government’s intention to encourage the expansion of Spanish companies in the Russian market and trade between the two countries. 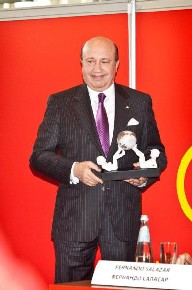 Chairman of the Spain-Russia Council Foundation and former Russian Minister of Foreign Affairs, with strong personal ties with Spain, both as Ambassador of the Russian Federation in Spain and, later, during his time in charge of the Ministry of Foreign Affairs. Ivanov was in favour of continuing to promote business, economic and cultural exchanges between the two countries. 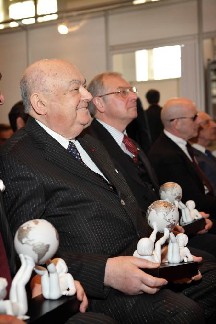 A top-ranking Russian politician with a long career behind him. Deputy Mayor of Moscow when he was named Friend of the Spain Brand. He has done some notable work in promoting foreign investment in Moscow, and fomenting Russia’s economic and trade relations with its European neighbours, including Spain. He is also renowned for having favoured economic and cultural exchanges between Russia and Spain within the context of the Dual Year of Russia in Spain and Spain in Russia. 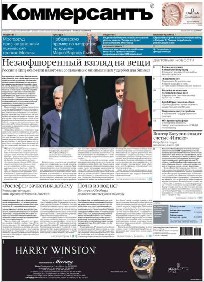 A financial publication founded in 1909 and banned by the Bolsheviks in 1919, Kommersant was re-launched in 1990 as a weekly magazine and subsequently, as a daily newspaper. A “western-style” newspaper, Kommersant is one of the best newspapers in Moscow. It has exerted some influence on Russian journalism and is responsible for training many young Russian journalists who now work in other media.

The award was collected by the paper’s Editor-in-Chief, Mikhail Anatolevich Mijjalin 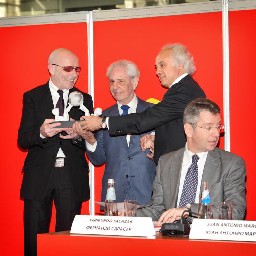 A Muscovite but with strong links to Spain. At the age of 14 he moved to Valencia to develop a highly successful tennis career achieving World Number 1 in the ATP Rankings for 9 weeks: Winner of the 2000 US Open; Finalist in the 2002 Australian Open; Finalist in the 2004 Australian Open; and Winner of the 2005 Australian Open. The award was collected by Yákov Savélievich Chatkhin,General Secretary of the Tennis Russian Federation, and Alberto Quintana, Adviser of the President of the Tennis Russian Federation. 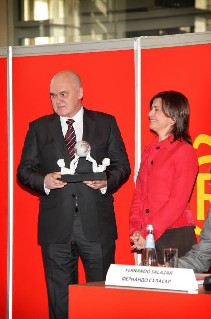 Chairman of Rospatent, the Russian Patent and Trademark Office, maintaining an important, close relationship with his Spanish counterpart.

Of particular importance is the excellent relationship and work done by his CEO, Boris Petrovich Simonov.

World-famous prestigious ballet dancer, director, producer and choreographer with links to Spain and the Spanish brand, LLadró. In 2007 he organised a concert in honour of Maya Pisepskaya at the Teatro Real in Madrid and also promoted the creations of High Porcelain by Lladró in most of the events organised by Lladró in Russia, creating the entire set required to provide a Russian cultural backdrop for all the works created by this firm. 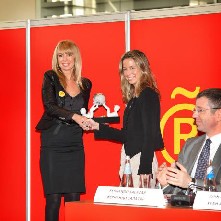 A women’s daily fashion and beauty magazine with contributions from many Spanish brands in the fashion, jewellery and perfume industry. The award was collected by Advertising Director Svetlana Nikulina from Carla Serrat, International Retail Manager at Tous. 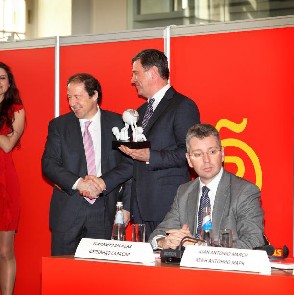 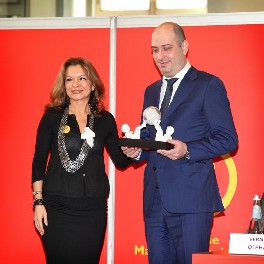 A magazine specialising in the wine sector and providing a platform for promoting a great many Spanish wines. The award was collected by Igor Magometov from Cristina Forner, CEO of Marqués de Cáceres. 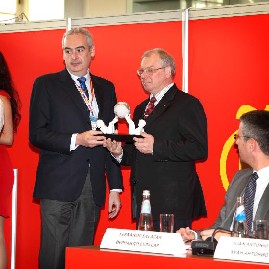 The award was collected by Yuri P. Stestenko, Director of the Department for Europe from Russia’s Ministry of Economic Development. It was presented by Guillermo Martínez Acero, Talgo’s Director for Russia. 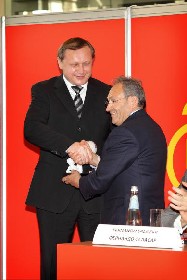 Russian shoe dealer with 10 years’ experience working with Spanish brand Pikolinos. His work has focussed on marketing and promoting the brand, competing mainly with top-level Italian brands. Thanks to this work, the image of Spanish footwear has gained ground in the difficult Russian market. The award was presented by Pikolinos Chairman Juan Perán.

Turbinov has been able to include FERMAX in the distribution of Russian security products and in the most representative projects of Moscow City. They have adapted the FERMAX product to the Russian market, not only with respect to marketing and technical aspects, but also the way the product is presented. 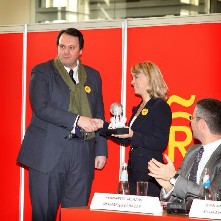 One of the largest tourist agencies in Russia, specialising in arranging tours in southern Europe. It is the first agency that will begin sending tourists to Spain in 2011 directly from various parts of Russia. It is estimated that in the summer of 2011 some 150,000 tourists will be taken to Spain. The award was collected by Natalia Vorobieva. 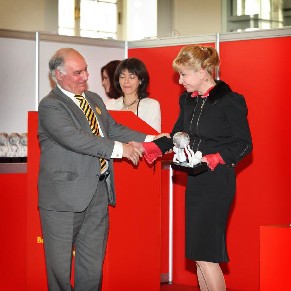 This is a major Russian company that distributes Spanish cava such as Freixenet and other wines like those produced by Bodegas Torres.

The award was collected by the company chairwoman, Irina Forminasr from Gonzalo Ceballos, CEO of Freixenet in Russia. 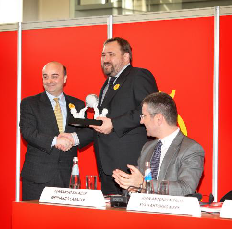 Travel agency. A Russian travel agency that has made a significant contribution to the growth of Russian tourism in Spain. The award was collected by the company’s CEO, Dimitry Marín from Gerardo Ramos, Iberia’s Manager in Russia.