Friends of the Spain Brand and of Spanish Brands in France

The awards ceremony for the “Friends of the Spain Brand” and the “Friends of Spanish Brands” in France was held on the evening of December 12 at the InterContinental Hotel in Paris-Opera. The awards were presented during the annual Gala Dinner of the Official Spanish Chamber of Commerce in France (COCEF).

This year, awards were presented to: 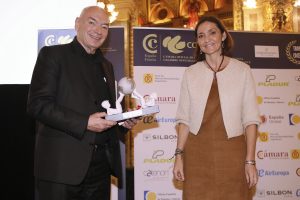 Jean Nouvel is one of the world’s most important and prestigious architects. He is especially known for having designed iconic buildings in Spain such as the AGBAR Tower in Barcelona and the extension of the Reina Sofía Museum in Madrid, which have helped to boost Spain’s appeal as a tourism and cultural destination. 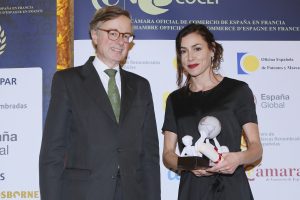 Olivia Ruiz is a key figure on the French music scene. Of Spanish ancestry and with significant family ties to Spain, she is a lover and connoisseur of Spanish culture and music, whose influence is felt in her music. 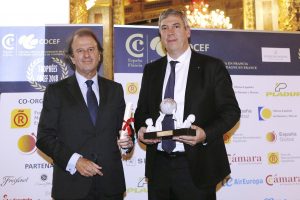 Renault is one of the world’s largest automakers, and it has made a firm commitment to invest in Spain, where its three factories in Valladolid, Villamuriel de Cerrato, and Seville together employ about 4,200 workers. The award was presented to José Vicente de los Mozos, Vice President of Manufacturing and Logistics of the Renault Group. 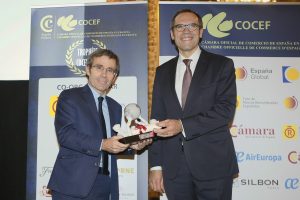 David Pujadas, one of the most notable and well-established journalists on the French and European media scene, is a political analyst and news anchor for French television. Of Spanish descent and born in Barcelona, Pujadas has a great love of the language, culture, and cuisine of Spain, a country he knows well and visits frequently. 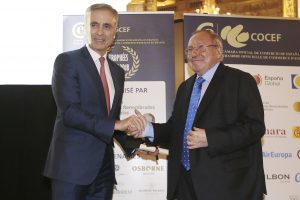 A French multinational whose origins date back to the 17th century, Saint-Gobain Group is a world leader in the production of glass and other building materials today. The company established itself in Spain in 1905 by founding Cristalería Española. Today, after 110 years of history in Spain, it employs 4,500 employees at more than 30 factories around the country. The award was presented to Claude de Imauven, CEO of Saint-Gobain Group.

Antoine Griezmann is one of the world’s best soccer players, and he has strong professional and personal ties to Spain. While playing for Club Atlético de Madrid, he contributed to the greatness and prestige of Spanish soccer. 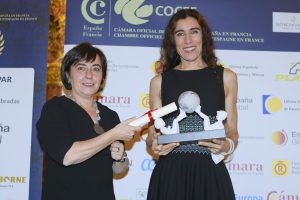 Blanca Li, a Spanish national, is a unique dancer, choreographer, director and filmmaker who has helped to spread Spanish culture throughout the world through her shows inspired by Andalusian culture. 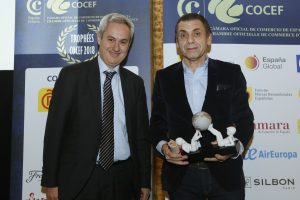 Editor of IDEAT and THE GOOD LIFE magazines in the lifestyle sector, he helps to publicize and promote numerous Spanish brands in the industry, including LLADRÓ. Last July, THE GOOD LIFE dedicated its 300 pages to Spain’s economy and lifestyle. 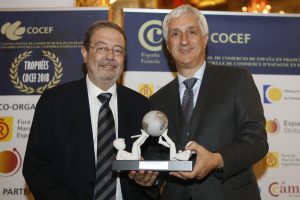 President of Semmaris-Marché de Rungis: Considered the world’s largest food wholesale market, it is the central market of Paris where you can buy countless fresh products from Spain, such as fish, meat, fruits, vegetables, cheese and flowers. In this way, he helps to promote and raise awareness of the quality of Spanish food products. 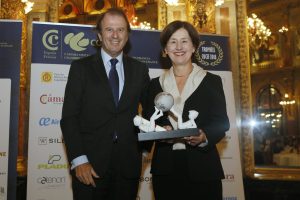 Director of the GOURMET SELECTION FAIR: Since 2009, GOURMET SELECTION has established itself as the only specialized trade fair offering high added value and dedicated to niche distribution channels, gourmet spaces and commercial catering. A showcase for innovations, GOURMET SELECTION is a benchmark in the promotion of select Spanish gourmet products. 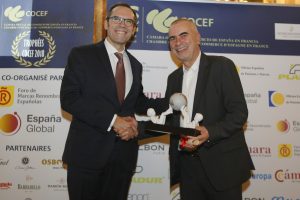 Founder of BELLOTA-BELLOTA: This French brand dedicated to the art of living combines the best of two countries and cultures: the quality of Spanish products, and especially of its Iberian hams, and the French sense of esthetics and refinement. It is an unbeatable platform for promoting Spanish cuisine and selling the best Spanish food products, including not only Iberian ham, but also tuna, octopus, anchovies, cheeses and wines from Spain. 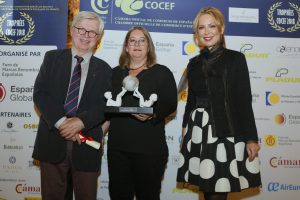 One of the most prestigious and comprehensive travel guides, it places special emphasis on a variety of tourist destinations in Spain, both urban and rural. In this way, it has helped to spread knowledge of Spain in France and around the world, contributing to the growth of the country’s tourism sector. Guide du Routard is perhaps the most popular tour guide among French readers. Constantly updated, it expands its selection of destinations in Spain every year. 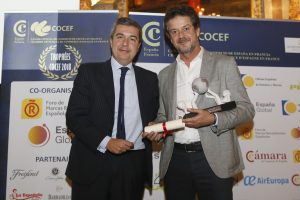 It is the platform that pioneered the online fashion outlet model around the world. In 2016, it acquired what was its biggest competitor in Spain, the e-commerce platform Privalia. After the merger, the French company became the undisputed fashion outlet leader in Europe, reinforcing its presence in Spain and other markets. In addition, through this platform, many Spanish brands have been able to break into the international market and sell their products across Europe.